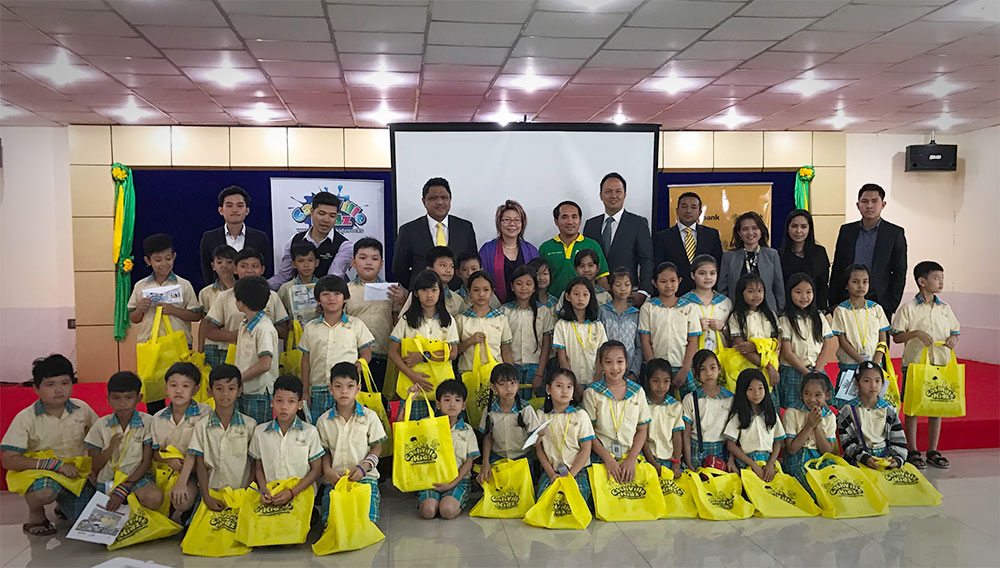 The program which started with the first batch of students ofWestline School, received good response from the students and staff members of the school. Students participated enthusiastically during the program as they followed the story of the four main characters of Cashville Kidz; Sens Andola, Penny Wise, Suzy Spendamore, and Barry Maveric.

The Cashville Kidz Financial Literacy program which was developed and produced by MoneyTree, was a success in Malaysia, having reached approximately 150,000 kids in more than 700 schools. The programalso won two International Awards, namely the Efma – Accenture Innovation Award 2013 in Paris, and the Global CSR Award 2014 in Bali.

Through the introduction of this program in Cambodia, Maybank Foundation aims to increase the level of Financial Literacy amongst school going children.The program is part of the ongoing comprehensive initiative by Maybank Foundation todevelopfinancially savvy children across the entire ASEAN region.

The pilot phase in Cambodia will be conducted in eight schools, reaching out to 800 students in Phnom Penh. This program is aimed at children between 9-12 years of age.It is expected to run in Cambodia over the next three years and reach out to a total of more than 10,000 students.

The Maybank Foundation Cashville Kidz Financial Literacy Program, was jointly launched byHer Excellency Chea Serey, Director General, Central Banking, National Bank of Cambodia (NBC) and the CEO of Maybank Foundation, Mr Shahril Azuar Jimin on 6December 2016. The program will run over the next few months, and will conclude with a Cashville Kidz Grand Finale, in which the best students from their respective schools will battle it out to claim the title of the “Cashville Kidz Champion” and walk home with attractive prizes.

Mr Shahril, in his opening speech of the first Cashville Kidz session at Westline School said,"We are excited to be introducing and rolling out the Cashville Kidz Financial Literacy Program in Cambodia. Cashville Kidz is a Flagship Program of Maybank Foundation, which has been taught to more than 150,000 students in Malaysia over the last 3 years. This move is our first overseas expansion of this hugely successful program which we intend to expand regionally, and represents a significant investment in Cambodia's students, and displays the commitment of Maybank in enriching the communities it works with."

As part of the program, MoneyTree trained teachers in the schools to conduct class sessions using the animated series and provided the schools with a Cashville Kidz Tool Kit created specially to increase student engagement. The Cashvile Kidz Tool Kit consists of a Teacher’s Guidebook and Manual, Implementation guides, Cashville Kidz Series DVD, and a Financial Profiling assessment that would track the progress of the students in the class.

This collaboration between Maybank Foundation and MoneyTree to promote Financial Literacy amongst students in the ASEAN region is the most comprehensive initiative of its nature in the region.