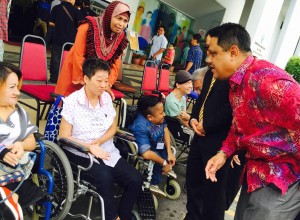 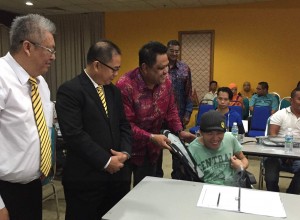 To conduct entrepreneurship training for 200 Persons With Disabilities

Maybank Foundation has extended its R.I.S.E (Reach Independence & Sustainable Entrepreneurship) Programme to Sabah, targeting to build the capabilities of 200 Persons with Disabilities (PWDs) in the State, through a structured training and mentoring programme.

The Foundation today launched the first part of its programme in Kota Kinabalu, which saw some 30 PWDs come together for a three-day Entrepreneurship & Financial Training session. This will be followed by a 3-6 month mentoring period where the participants will be trained, coached and mentored to develop their entrepreneurial skills designed to help them achieve higher income levels and improve their overall standard of living.

The programme was launched at the Sabah State Library in Kota Kinabalu recently by the CEO of Maybank Foundation, Shahril Azuar Jimin, who was accompanied by Maybank Regional Director for Sabah, Liew Kui Choi.

Speaking at the launch, Shahril said that R.I.S.E is one of the Foundation’s six flagship programmes under Maybank Group’s Community & Citizenship pillar. A pilot programme was carried out in the Klang valley in September 2014, reaching out to 280 participants from underprivileged households comprising PWDs, single mothers and marginalised persons.

“This pilot project was a huge success and exceeded our expectations as it resulted in an increase of 411.7% in average income per participant for the top 40% of our pioneer group of participants,” he explained. “It encouraged us to move into Phase 2 of the programme which was launched on 5 August 2015 where we expanded the scope to a total of 1,800 people in three countries namely Malaysia (1,400), Indonesia (200 as pilot), and Philippines (200 as pilot) of which 70% will comprise PWDs.”

Shahril said that the Foundation has so far trained more than 800 participants throughout Malaysia in Phase 2 and was excited to be in Sabah for its inaugural training session. “These 800 participants have shown good progress and we are confident that we can achieve similar success in Sabah,” he said.

“Our commitment to supporting and empowering the disadvantaged, especially PWDs, is very much in line with Maybank’s mission of humanising financial services,” Shahril added.