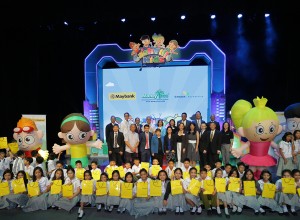 Bonifacio Global City, Taguig City – Maybank Philippines (MPI), together with Maybank Foundation and in partnership with MoneyTree Asia, today announced the pilot of the award-winning CashVille Kidz – a financial literacy program – in the Philippines.

Maybank’s Cashville Kidz program aims to address the need for financial education in Philippine schools and is in line with the national agenda of the Bangko Sentral ng Pilipinas (BSP) of promoting financial literacy and inclusion among school-aged children. The BSP has been a strong advocate of the “Banking on Your Future” campaign which encourages savings among children and young adults. Similarly, Maybank’s financial literacy program strong supports the Department of Education’s Financial Literacy Education for teachers and learners, and its integration in the K to 12 curriculum.

With the theme “Lighting Up a Brighter Financial Future for the Next Generation of Youth in the Philippines”, CashVille Kidz program is structured to create greater awareness about the importance of Financial Literacy starting with elementary school children. The pilot run of the Program will be in Metro Manila schools for SY 2019-2020. CashVille Kidz program aims to complement BSP’s effort in raising financial consumer awareness and strengthening consumer empowerment.

CashVille Kidz is a creative animated cartoon series designed to teach elementary children the importance of money, in order to prepare them to meet future financial challenges. The 8-episode animated series focuses on specific financial lessons that range from the importance of saving money to developing positive spending habits and making smart investments, eventually enabling participants to make informed financial decisions with confidence and raise their financial capability.

In giving the overview of the Cashville Kidz, Shahril emphasized: “The age of digitisation presents many challenges for the future generation. One of these seem to be the lack of sound financial management skills. Through CashVille Kidz, we hope to strongly contribute in educating young school children on the importance of money management habits in an exhilarating experience.”

‘We are thankful to Maybank Foundation for its continued commitment and support to the Philippines, and choosing its next expansion area for the successful CashVille Kidz Program. We are confident that the program will leave an indelible mark in the communities we serve in the country,” said Wai Hong.

He added: “For the pilot phase, in collaboration with our program partner MoneyTree Philippines, we are selecting 8 primary schools in Metro Manila, targeting 1,200 students from Grades 4 to Grade 6 who will be under trained teachers. Like in all countries where Maybank operates, one of the key guiding principles for the bank is to grow with the community, advocating financial education as a tool to provide a holistic financial solution, in line with our mission of humanising financial services.”

CashVille Kidz was first aired in Malaysia in February 2013, and the program was recognised by the Malaysian Ministry of Education as one of its programs and accepted as an extra co-curricular activity that awards participating students with co-curricular points. The program was subsequently introduced in Cambodia in 2016 and has been endorsed by the National Bank of Cambodia and the Ministry of Youth, Education and Sport as a program to help improve financial literacy level of Cambodian students. As of 2018, more than 1,500 teachers has been trained to conduct CashVille Kidz in more than 800 schools across Malaysia and Cambodia, with more than 180,000 students participating and benefitted thus far.

CashVille Kidz has won many international awards, among them the “Efma-Accenture Innovation Awards 2013” in Paris and the “Global CSR Awards 2014” in Bali, and these awards has established Maybank as a financial literacy education champion and paved the way for this flagship initiative to be easily replicated and upscaled in other countries where Maybank has presence. Most recently, the CashVille Kidz Financial Literacy Program was awarded Gold in the Best Community Programme Award Category in the prestigious 11th Annual Global CSR Summit and Awards 2019.

Also announced during the launch event were the first batch of scholars under the Maybank Group Scholarship Program. Given out to deserving students since 1972, this year marks the first time that the scholarship has been awarded to incoming university students outside Malaysia.