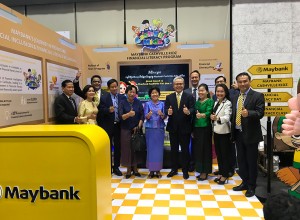 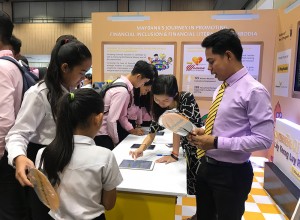 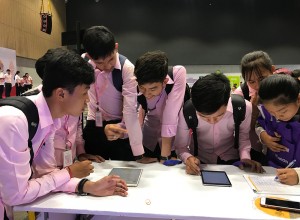 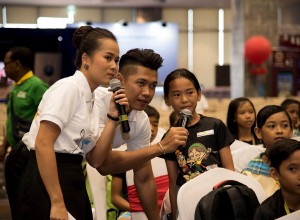 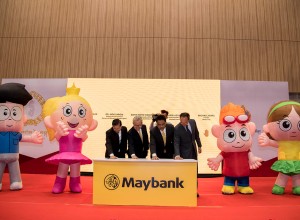 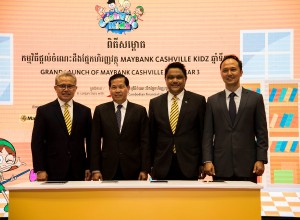 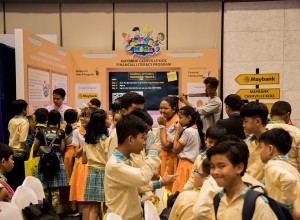 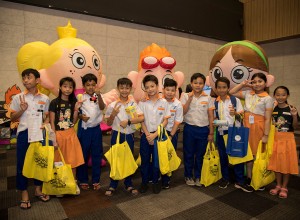 The Maybank Group through its corporate responsibility arm, Maybank Foundation, launched Cashville Kidz Financial Literacy Programme 2019 in conjunction with the Cambodian Financial Literacy Day, organised by the National Bank of Cambodia, in collaboration with the Association of Banks in Cambodia and Cambodia Microfinance Association. The CashVille Kidz Financial Literacy programme, running in its third year will continue to champion financial literacy amongst Cambodians through a strategic partnership with the National Bank of Cambodia and Ministry of Education, Youth & Sport.

The Cambodian Financial Literacy Day is an initiative by the National Bank of Cambodia aimed to raise awareness of the importance of financial literacy for both mainstream consumers and the public as well as to increase the number of stakeholders in joining financial literacy efforts. Maybank is pleased to be a significant part of the program, which further echoes its efforts that had been put in since 2016 in playing a key role in boosting financial literacy amongst school children in Cambodia.

Speaking at the event, Shahril Azuar Jimin said “It is very encouraging to see Cashville Kidz continuing to achieve its objectives for Cambodia in 2018, where against a target of 3,200 we managed to train more than 4,000 students in Phnom Penh. Given the success thus far, we are pleased to announce the expansion of this programme to provinces outside Phnom Penh this year.” Shahril further added that Cashville Kidz is designed to encourage the development of a generation that is more knowledgeable in terms of managing their finances and therefore the strategic partnership with the National Bank of Cambodia and Ministry of Education, Youth & Sport will certainly help raise the financial literacy rate amongst the young in Cambodia.

Maybank Foundation announced that the rollout of Cashville Kidz programme this year will be carried out in 30 schools, covering both Phnom Penh and other key provinces across Cambodia. The programme reinforces Maybank’s commitment to humanise financial services as well as support the United Nations Sustainable Development Goals (SDGs) 4 (Quality Education) & 17 (Partnerships for the Goals).

CEO of Maybank Cambodia, Dato’ Mohd Hanif Suadi said, “As we continue to play a role in contributing to the Cambodian economy, Cashville Kidz is a great platform for the Bank to give back to the communities where it operates. The programme running strong in its third year continues to create positive impact amongst children as we build a generation of young people who are well equipped with adequate financial knowledge that would be beneficial in the future.

The award winning Cashville Kidz programme which was created and produced by MoneyTree Asia Pacific Pte Ltd, is endorsed by the National Bank of Cambodia and the Ministry of Education, Youth & Sport. It aims to address the need for financial education in schools and is in line with Maybank Foundation’s objective to champion financial literacy across ASEAN by educating school children via an animated series.

The animated series is designed to teach school students the importance of money, in order to prepare them for future financial challenges. The series tagged with an educational element, focuses on specific financial lessons that range from the importance of saving money to developing positive spending habits and making smart investments.

The animated series features four main characters named Penny Wise, Barry Maverick, Sens Andola, and Suzy Spendamore, where the characters face individual challenges and in the process, develop their personalities and learn financial skills. Targeted at children aged 8 – 12, Cashville Kidz aims to make learning fun and educational at the same time.
Cashville Kidz is a flagship initiative of Maybank Foundation aimed at boosting financial literacy amongst school children, and can be easily replicated and up-scaled in other countries where Maybank has presence.

The programme was initially launched in Malaysia in collaboration with MoneyTree and first aired in February 2013. It is recognised by the Malaysian Ministry of Education as a Flagship Financial Literacy Programme for schools and accepted as an extra co-curricular activity that awards participating students with the compulsory co-curricular points every student requires. Since its inception in 2013, the programme has reached more than 180,000 students from more than 790 schools across Malaysia as well as more than 5,000 students from 23 schools in Cambodia.