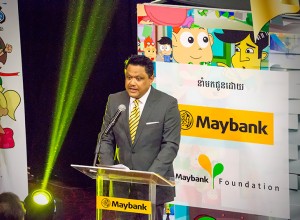 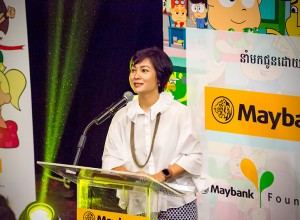 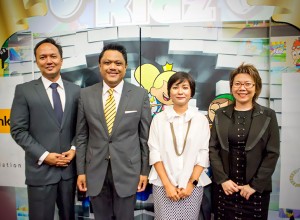 Phnom Penh – Maybank Cambodia, together with Maybank Foundation, and in partnership with MoneyTree Asia Pte Ltd, today launched an initiative called “CashVille Kidz”- a financial literacy program in Cambodia. The program, which is endorsed by the National Bank of Cambodia, aims to address the need for Financial Education in schools and in line with its objective to champion Financial Literacy across ASEAN to educate school going children on Financial Literacy via an animated series.

Carrying the theme “Doorway to a Brighter Financial Future for the Next Generation of Cambodians”, this program is structured to create greater awareness on the importance of Financial Literacy amongst the different communities in Cambodia. The National Bank of Cambodia had in early 2016, rolled out its “Let’s Talk Money” Consumer Financial Empowerment Campaign targeted at young adults, and this CashVille Kidz program aims to complement the National Bank of Cambodia’s effort in raising financial consumer awareness and strengthening consumer empowerment.

CashVille Kidz is an exciting animated cartoon series designed to teach school students the importance of money, in order to prepare them to meet future financial challenges. The 8-episode animated series will focus on specific financial lessons that range from the importance of saving money to developing positive spending habits and making smart investments.

Viewers will follow the adventures of the program’s 4 main characters: Penny Wise, Barry Maveric, Sens Andola, and Suzy Spendamore, as each character confronts individual challenges that develop their personalities and experiences. Targeted at an audience of 9 - 12 year olds, CashVille Kidz aims to make the learning process a fun and educational one at the same time.

“The world we live in presents many challenges for the future generation. One of the main problems that seem to be plaguing young adults globally is the lack of sound financial management skills. This has caused many young people to start out their adult life in debt and in some cases, it gets them into legal problems. We hope to play a part in educating young minds through CashVille Kidz on the importance of money 2 management habits in an exhilarating experience through CashVille Kidz,” said Shahril Azuar Jimin, CEO of Maybank Foundation.

“For the Pilot phase, we are selecting 8 primary schools in Cambodia targeting 800 students. Subject to the success of Pilot programme, this would be the start of a three-year campaign in Cambodia with a total reach of 20,000 students from more than 100 schools. In Cambodia, one of the key guiding principles for the bank is to grow with the community to protect, preserve and increase their wealth. In line with our mission to humanise financial services, Maybank advocates financial education as part of providing a holistic financial solution to our communities,” said Cynthia Liaw, CEO of Maybank Cambodia.

The CashVille Kidz program in Malaysia Financial Literacy Program was aired in February 2013 and the program is recognised by the Malaysian Ministry of Education as one of its programs and accepted as an extra co-curricular activity that awards participating students with the compulsory co-curricular points every student requires. Over the course of the last three years, the program has reached more than 150,000 school children from 700 schools across Malaysia.

With the overwhelming success of the CashVille Kidz program in Malaysia, the Foundation is now expanding the program to Cambodia. In Cambodia, the program will have lessons in both Khmer and English. The program not only aims to improve the level of Financial Intelligence amongst the school going children but to initiate discussions on the subject matter between parents and their children - creating a possibility of educating the parents as well.

CashVille Kidz which has won 2 International Awards - the “Efma-Accenture Innovation Awards 2013” in Paris, and the “Global CSR Award 2014” in Bali, aims to establish Maybank as the champion of financial literacy education and to create a flagship initiative for Maybank Foundation that can be easily replicated and upscaled in other countries where Maybank has a presence.

The launching of the financial literacy program in Cambodia signifies the first time that Maybank Foundation introduces CashVille Kidz outside Malaysia, which would help further its cause in ensuring the next generation of children and youths are well equipped with the financial knowledge they would need to thrive in today's world.

Maybank Foundation undertakes sustainable Corporate Social Responsibility initiatives for the Maybank Group regionally in line with its mission of humanising financial services. The Foundation focuses on 6 key areas, namely Education, Community Empowerment, Healthy Living, Environmental Diversity, Arts & Culture, and Disaster Relief. In all six areas and in every country it operates in, Maybank Foundation is focused on activities and programmes that would create meaningful, measurable and sustainable impacts that differentiate the Maybank Group from its competitors, and complement its mission to humanise financial services.