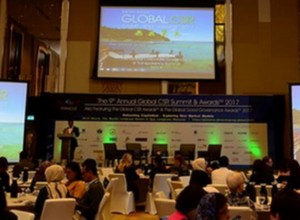 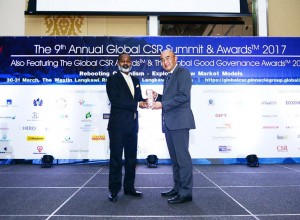 The 9th Annual Global CSR Summit & Awards and the Global Good Governance Awards 2017 was held from 30 – 31 March 2017 in Westin Langkawi Spa & Resort. The event is recognised as one of the most prestigious and respected platforms for recognising excellent CSR and governance practices from companies and leading brands, across the region and around the world.

Maybank Women Eco Weavers supports women weavers from poor and marginalised communities and aims to support traditional weaving practices in ASEAN countries. Through training, capacity building and microfinance, the women will obtain access to tools that help them and their families become economically independent.

The objectives of the programme are to:

During the early phase in 2016, we trained 55 women weavers, engaged 96 mulberry tree farmers and planted 13,500 mulberry trees in Cambodia and began activities in four districts of Indonesia.

The construction of the Maybank Silk Weaving Training Centre in Takeo Province, Cambodia, started in March 2016 and it is the first formal silk weaving training centre of its kind. In Indonesia, the programme was launched in November 2016, with a training programme on weaving and microfinance in East Lombok, Central Lombok (West Nusa Tenggara), Sawahlunto and Tanah Datar (West Sumatera). The training also includes modules on environmentally friendly dyeing of textiles. It aims to train 400 weavers, creating four new markets to connect weavers and cooperatives with wholesalers and retailers, establishing four locally managed weaving learning centres in the districts as well as ensuring that awareness on the importance of natural dyes is increased.

The programme is supported by the ASEAN Foundation, that shares our mission to preserve the ASEAN cultural heritage and contribute towards building the ASEAN identity. We are planning to expand the programme to Laos in 2017. Through this programme, we aim to promote and enhance traditional textiles globally in a sustainable manner whilst creating economic independence and financial inclusion for women weavers regionally.

In 2011 and 2012, the Bank built and repaired clean water infrastructure that benefited more than 1,800 people in 10 villages who were able to access clean water supplies as well as reforestation of the slopes, that had been affected by hot lava. The reforestation programme was Maybank Indonesia’s contribution towards environmental conservation and the Bank provided 10,000 trees to be planted to replace the destroyed trees. Conservation of the natural environment is important for the well-being and livelihood of the community living near Mount Merapi.

In 2014, Maybank Indonesia had also developed a biogas programme to provide an alternative and renewable energy for the benefit of the community. The programme was timely due to the increase in fuel prices as well as the Government’s regulation that prohibited the gathering of firewood in Merapi National Park. These created difficulties for the community, as firewood was the main source of energy for cooking and other daily activities. By building 10 new biogas digesters and revitalising another 15 biogas digesters, close to 400 people in 16 villages are now able to access renewable energy to support their daily activities. Maybank Indonesia also provided capital injection to cooperatives to support programmes related to the clean water supply as well as the provision of biogas to the community and the expansion of these programmes.