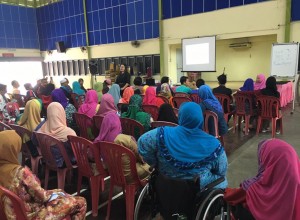 Reach Independence & Sustainable Entrepreneurship (R.I.S.E) is one of Maybank Foundation’s six flagship programme aimed at building the capacity/capabilities of people with disabilities (PWDs) through a structured training/mentoring programme. The objectives of the programme is to train, coach and mentor participants to develop their entrepreneurial skills which has resulted in improving their income and standard of living. The programme began in September 2014 and today, it has already positively impacted 714 people.

The RISE programme is so successful that it has now been expanded in Malaysia as well as being piloted in the region, specifically the Philippines and Indonesia. In Malaysia, on 15-16 April 2016, a training session was organised for the first time in Kelantan (at Dewan Majlis Daerah Ketereh) which received good response from the local community. A total of 51 participants attended the session which included 10 wheelchair bound PWDs, 6 hearing impaired people and 35 people who have various other physical challenges. Maybank Foundation will be targeting a total of 150 participants from Kelantan by working with organisations such as JKM Negeri Kelantan, Yayasan Orang Kurang Upaya Kelantan, Majlis Pemulihan Negeri Kelantan and Persatuan Insan Istimewa Kelantan (INSANI).