The Unseen Journey of a Blind Man 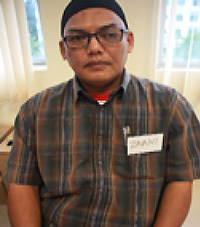 Mohd Zaiani bin Mohd Diah was an average, active child who like any other children his age, loved to play with friends. In 1989, just a few days before the school holidays, an unfortunate accident happened when one of his friends shot bamboo sticks with a slingshot-like toy. On that ill-fated day, Mohd Zaiani who was then only 10 years old became blind in his left eye, and was left with limited vision in his right. Life had not been any kinder to him after that either. Almost his entire life, Zaiani has had to beg on the streets to make ends meet. Whilst he did work as a masseur, his income has never been enough to support his life. He went to the street to beg, and provided massage services when it was requested. In 2006, he got scammed by an acquaintance of his. Zaiani’s so called ‘friend’ brought him to a bank on the pretext of opening a bank account. As the contract was in English, and him being illiterate, Zaiani signed the papers without knowing what was written on it. It turned out that the contract was for a credit card, and his friend used about RM30,000 with the card and disappeared. Due to this, Zaiani’s home which he shared with his brother was almost seized back to pay off the debt. Zaiani continued his cycle of begging on the streets and providing massage services when requested, because he didn’t have any hope.

Things changed in 2016, when he joined the Maybank RISE programme. He was finally able to break away from poverty as a result of attending the course and actively working with the mentors in the programme. He started actively promoting and advertising his then, home-based massage and cupping services from strategies learnt from the programme. From there, he started getting more businesses and requests from customers as he was now easily contactable, and his service was becoming more well known to the general public. When his services started to get more traction, he set up a stall at Seremban Jaya providing his services. It was also at this time where he also hired assistants, some of whom were also People with Disabilities (PWDs) as he wanted to provide employment to other PWDs who had gone through difficulties like him. He was later able to expand his businesses strategically by targeting customers. He opened his second branch at Pusat Peranginan in Ulu Bendul, hiring more People with Disabilities (PWDs), and targeting tourists, and the third branch at Pusat Sukan dan Rekreasi in Seremban, targeting tired sportsmen.

He now no longer needed to beg on the streets and even didn’t need the financial assistance provided by the national welfare organisations (JKM) as he started to earn well from his new business venture. As he was more than capable of standing on his own two feet. In fact, he received an award from our national welfare organization, Jabatan Kebajikan Masyarakat (JKM) for being “Usahawan Contoh (OKU)” meaning a Person With Disabilities who was a Successful Business Role Model. Zaiani attributes his success to learning and applying strategies he picked up from the Maybank R.I.S.E programme on how to improve his business and also lessons on how to properly manage his finances.

In February 2018, Zaiani won the “Best Massage” award in a competition among masseurs held in Melaka. His success story was featured in Berita Harian, Kosmo and Surat Khabar Negeri Sembilan. More recently, students of Universiti Utara Malaysia had requested to interview him as part of their research in writing a book on traditional medicine. As a result of this, Zaiani is also now confident in diversifying his services to include teaching courses on traditional Malay massage and cupping. He has become a trainer who now empowers others, but he never forgot where he came from, and keeps looking for ways to employ other PWDs and impact others.

Previously, Zaiani was never able to save. However, ever since he learned the best practices of personal financial management, from the R.I.S.E programme, he now manages his funds carefully. He has a detailed plan allocating certain amounts to savings, expenses and investments. For 37 years, Zaiani’s income was barely enough for him to even survive the day. Now however, he is feeling much more relieved that he could pay off the debt that he owes the bank as a result of the scam. To date, he has already paid half of the amount owed. Not only that, he is actively saving up towards building a buffer for times of emergency.

With proper planning of his finances and increased income, Zaiani has recently bought a second hand car and hired a driver for his family because his wife is also a PWD like him and the family had restricted mobility. He has always felt guilty and reluctant to travel as he had to rely on the goodwill of others to fetch him around since he could not drive. There were also times when he felt that people were not very willing to assist him, and he had to face their scorn and sneers.. The new car has increased his mobility to travel around from branch to branch, and also to venues where people have requested for the massage and cupping course. This has also proven to be a huge convenience to his family (including his wife who is also visually impaired) as they are able to travel more frequently as a family.

Most importantly, in order to avoid his children from suffering the same fate he did when he was growing up with a lack of education, Zaiani is now focusing on his children’s education. His eldest son has secured a scholarship to attend a boarding school for his secondary education but he pays for his monthly necessities and other expenses. Zaiani believes his son has the potential to achieve much more, and is thus now saving up for his tertiary education.

Despite turning his life around and achieving success, Zaiani who is now 39 years old, stays grounded, humble and generous. As he is able to empathise with those who are less fortunate, Zaiani regularly donates rice and money to people in need of help. He has also helped his elder brother who is working as a labourer financially. Zaiani gave a motorcycle to his brother in hope that it would assist him to become more mobile and help him travel more easily to work.